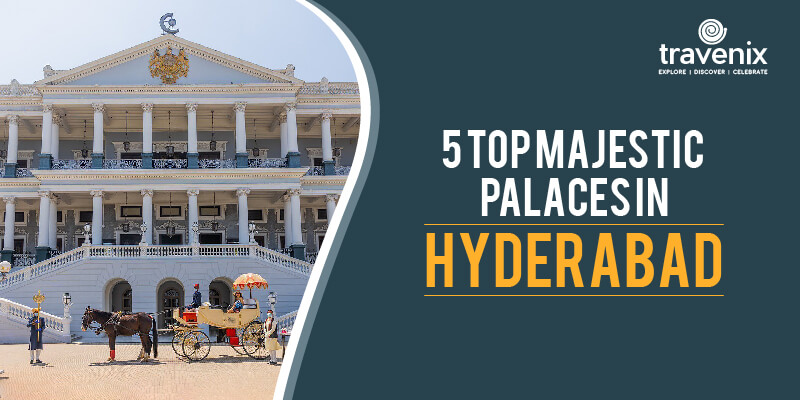 The palaces in Hyderabad are breathtaking from the outside and spectacular from the inside, with exotic touches of craftsmanship.
Even though Lucknow is popularly referred to as the City of Nawabs, with its palatial buildings and stately architecture, Hyderabad has a rich history of dynasties and their larger-than-life palaces.

The old city was once ruled by the Nizam, the ruler of the most opulent princely state, and the successors had left behind their mark in stately estates and palatial buildings, which exemplify the architectural finesse of ancient India.
It is well-known that the Nizams of Hyderabad led a flamboyant life and spent wealth on various cultural artifacts, much of which are well-preserved to this day. Even though many are converted into museums, they still stand tall and grand as reminiscent of the glorious past.
Let’s take a walk down memory lane and revisit the famous palaces in Hyderabad during the Nizam era.

Indian history is rich, and the standing architectures aptly reflect the exceptional skills of our craftsmen. One can find such beautiful forts, temples, and palaces in different parts of the country, each unique and different from the other. The city of Hyderabad has its fair share, a few of which are described below – 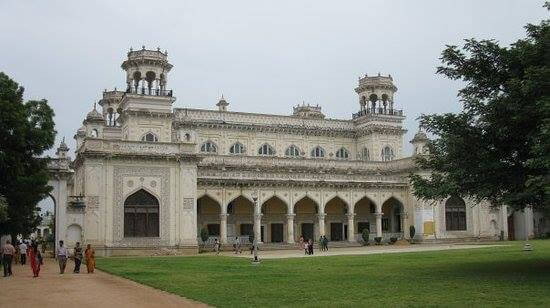 This is where lies the ancient seat of the Asaf Jahi dynasty. The foundation for Chowmahalla Palace was laid down between 1857 and 1869.
In a literal sense, Chowmahalla refers to ‘Four Palaces’ and comprises two massive courtyards, numerous palaces, Clock Tower, Roshan Bangla, the Council Hall, and a grand dining hall also known as ‘Khilafat’. In the bygone days, this legacy palace of Hyderabad served as the official residence of the Nizams and still retains some of its past splendor. It rightfully belonged to Barkat Ali Khan Mukarram Jah, heir of the Nizams, and was awarded the UNESCO’s Asia Pacific Merit medal in 2010. The architecture of the Chowmahalla Palace is nothing short of a masterpiece. Decked in delicate artwork of domes, arches, windows, and meticulously carved out designs, the palace is a sheer pleasure to the eyes of onlookers.
Further, the entire complex is embellished with gentle fountains and expansive lush gardens. The courtyards hold the most exquisite dinner parties for guests and visitors.

How to Reach Hyderabad’s Chowmallah Palace?

This magnificent palace is located right at the heart of the city. Nampally is the nearest railway station from where you can hire an autorickshaw or taxi to reach the palace. Otherwise, you can avail of bus services running on the same route to and from Nampally at frequent intervals. 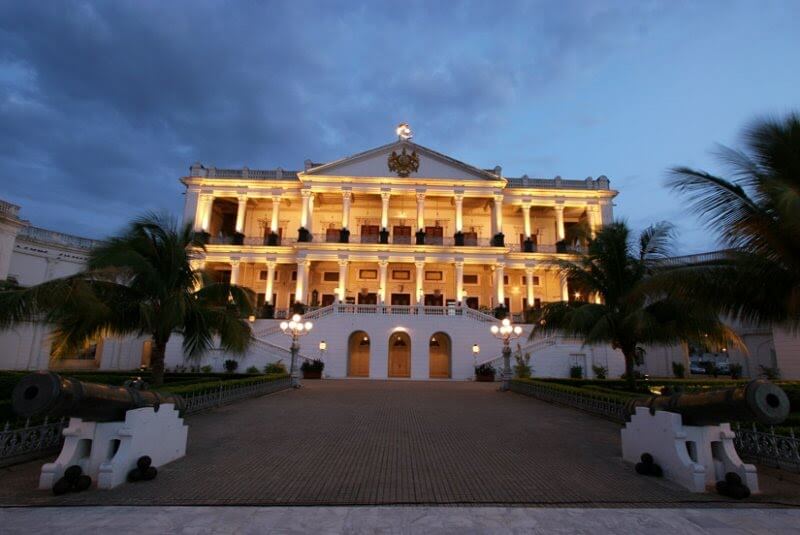 The Nizams of Hyderabad and their extravagant lifestyle are best exemplified by the palatial buildings which were once their abode. One of them being the Taj Falaknuma which stands tall at 2,000 meters above the city of Hyderabad.
The Falaknuma Palace in Hyderabad is deemed one of the finest palaces in the city. Falaknuma referred to Star of Heaven and received its delightful craftsmanship touches from an Italian architect. The palace takes the shape of a giant scorpion with two wings spread out in the north. The entire palatial complex is divided into three parts – the middle section comprises the main building and the kitchen, Gol Bangla, Zenana Mahal, and harem quarters stretch to the south. There are approximately 220 ornamented rooms and 22 spacious halls. The major highlight of the palace is the state reception room. Its ceiling has been decorated with frescoes and gilded works. The ballroom houses a manually operated organ weighing two tons and is said to be the only one of its kind. The library is roofed in the shape of a magnificently carved walnut replicating the one at Windsor Castle.
The Jade collection and the collection of Holy Quran and paintings, statues, royal furniture, and books from around the world décor the rooms and the halls.
History says this grand palace was once the royal residence of Nizam. Unfortunately, this place is not open to the general public. Rather, the royal palace has been converted into a five-star luxury hotel to give the same royal treatment to its clientele.

How to Reach Taj Falaknuma

The palace is just 5 kilometers away from the Charminar. It can also be reached from the Nampally Railway Station, located 9 kms from the palace. 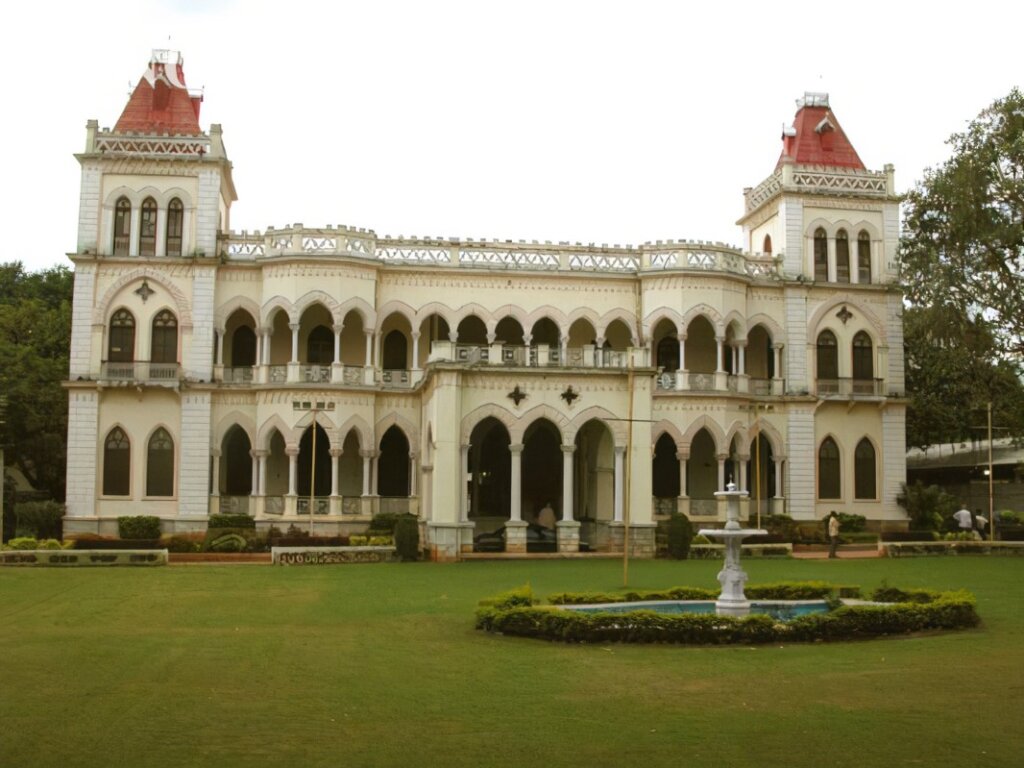 Legend says this palace was the favorite of the seventh Nizam of Hyderabad, Osman Ali Khan, Asaf Jah VII. Kamal Khan initially laid down the foundation for this magnificent structure. But, it was later passed onto the Nizam when he expressed interest in the architecture. King Kothi referred to the King’s mansion and became the official residence when Osman Ali Khan became the seventh Nizam. The palatial estate is divided into two different groups and houses a huge library as well. Frescoes and other ornate designs reflecting the European style of architecture add to the interior glory of the building.
Today, the main building has been converted into a government hospital. Mubarak Mansion, one of the other buildings in the same palatial complex, is used as an office space wherein the Usman Mansion lies in ruins.

How to Reach King Kothi Palace

The King Kothi Palace is located nearer to Hyderabad Deccan Railway Station. You can also avail yourself of the bus services from the nearest cities and states.

4. The Delectable Malwala Palace of Hyderabad 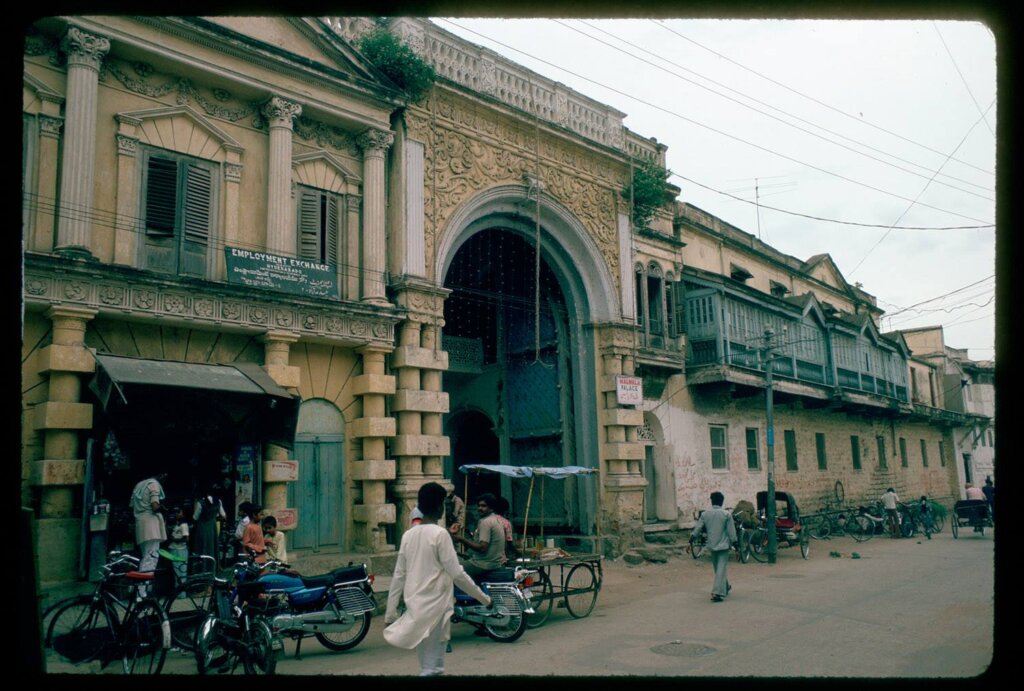 This incredible masterpiece is one of the famous palaces in Hyderabad, dating back to the 18th century. Located in one of the oldest neighborhoods of Hyderabad, Moghalpura, the Malwala Palace boasts a perfect confluence of three different architectural styles – Rajput, Mughal, and the art of Hyderabad itself. There are various pavilions leading up to the main structure, and each pavilion is named after the rulers of the same period. The Raja Bhagwandas Bagh Pavilion is the much-admired pavilion among all. The same palace played a very significant role during the Nizam reign. However, the noteworthy feature of this palatial structure lies in the furniture made out of fine imported teak wood.

How to Reach Malwala Palace

One can avail of the local conveyance to reach the palace from the city of Hyderabad by road. It will take not more than 5-7 minutes. One thing to remember, the Malwala palaces remain open for visitors from 6 am to 6 pm. 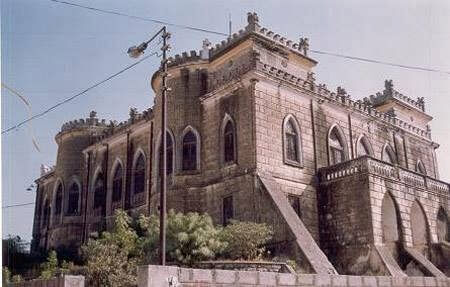 Popularly known as the Asmangadh Fort, this palace stands atop a hill, hence the name, Asmangadh or Home in the Sky. The bricks for the foundation were laid down by Sir Asman Jah, the then prime minister of erstwhile Hyderabad state, in 1885. Later, Sir Asman Jah gifted the palace to the Nizam.
The incredible structure resembles a miniature medieval European Castle. And the stunning view of the surrounding woods is quite breathtaking. The palace used to serve as the Jagdrevier for the Nizam and his courtiers.
Sadly, the 135-year-old palace in Malakpet had seen many worse days. Recently, a part of it was demolished under State Court Order and allegedly under the direction of St. Joseph’s School, which has been running its campus on the palace’s premises since 2000.

How to Reach Asmangadh Palace

One can still witness the remains of the once magnificent palace of Hyderabad from outside the gates. It is accessible by train and road, Saleem Nagar being the closes bus station located 4 mins walk away from the palace. Malakpet Railway Station is the closest one to Asmangadh Palace.

Obviously, the list doesn’t end here. Many other beautiful architectures dot the whole city of Hyderabad, and it might take more than one day to visit and admire their structural beauty. The Palaces of Hyderabad are one of a kind, and their architecture is unique but inspired by other structural designs and styles. Nevertheless, Hyderabad’s Nizam Palaces tour will give a perfect gateway for historical lovers and others who enjoy fine pieces of art and architecture.