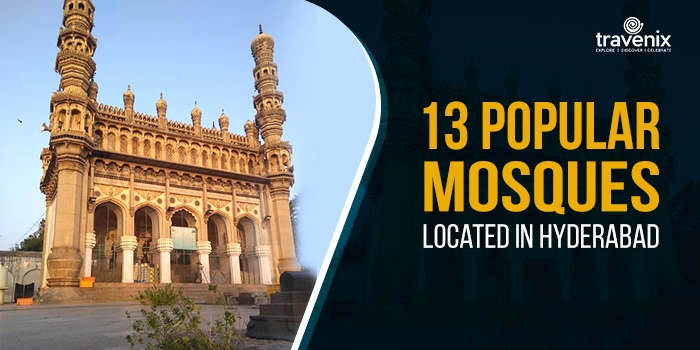 13 Must Visit Mosques in Hyderabad – Oldest and Ancient Mosques

Hyderabad is home to one of the most alluring historical monuments in India, the Charminar and offers a lot to do in Hyderabad. In Hyderabad, one can witness the grandeur of medieval era architecture, which ranges from forts and palaces to lakes and religious places.

The historic and famous mosques in Hyderabad are much more than religious symbols; these age-old mosques have withstood the test of time to tell tales of their grandeur. Here is a list of these remarkable mosques of the city, which fascinate onlookers with their beauty: 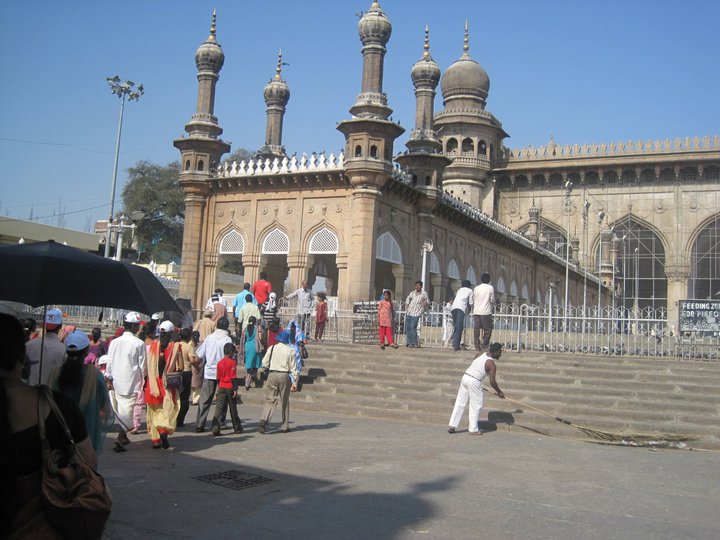 This alluring mosque is one of the oldest mosques in Hyderabad, and continues to captivate its onlookers till date. This 300-year-old mosque is also one of the largest mosques in India, with the capacity to accommodate about 20,000 worshippers at once.

Mecca Masjid of Hyderabad is one of the most popular tourist places in the city, constructed in the 17th century. The foundation of the mosque was laid in 1614 by Sultan Mohammed Quli Qutub Shah and the construction was finally completed in 1694 during the reign of Aurangzeb.

The mosque is named as Mecca Masjid or Makkah Masjid as it is believed that the soil from the Holy Land of Mecca was used in making the bricks that were later used in the construction of this mosque. 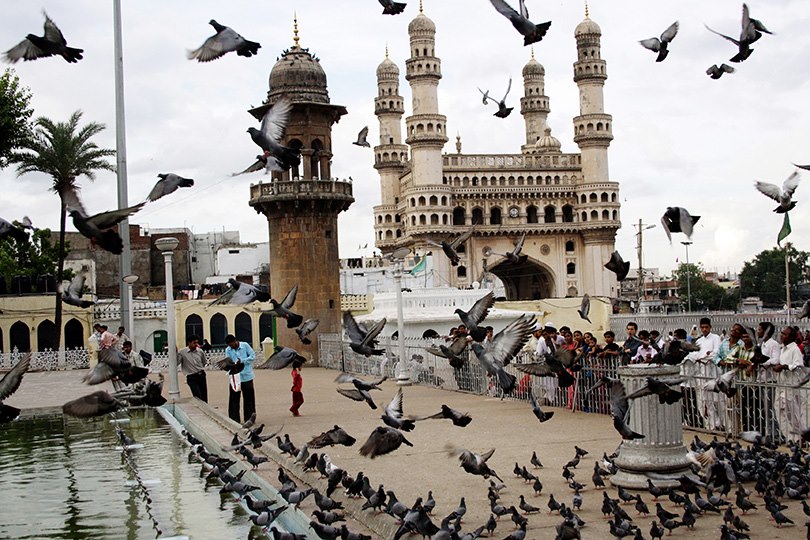 Charminar, located at the heart of the city has become synonymous with Hyderabad. This 400-year-old grand monument is also one of the most famous historical places in Hyderabad. Charminar is one of the finest examples of the Indo-Saracenic style of architecture in India.

The Urdu word Charminar translates into four minarets (‘Char’ means four and ‘minar’ means minarets). This enchanting monument was constructed during the reign of Quli Qutub Shah,the fifth ruler of Hyderabad in 1591. The four arches of this Indo-Saracenic style facade faces the four cardinal points that emerge into lanes bustling with bazaars.

The mosque at Charminar is located on the second floor of the monument. The city of Hyderabad was planned with Charminar as the focal point of the city. 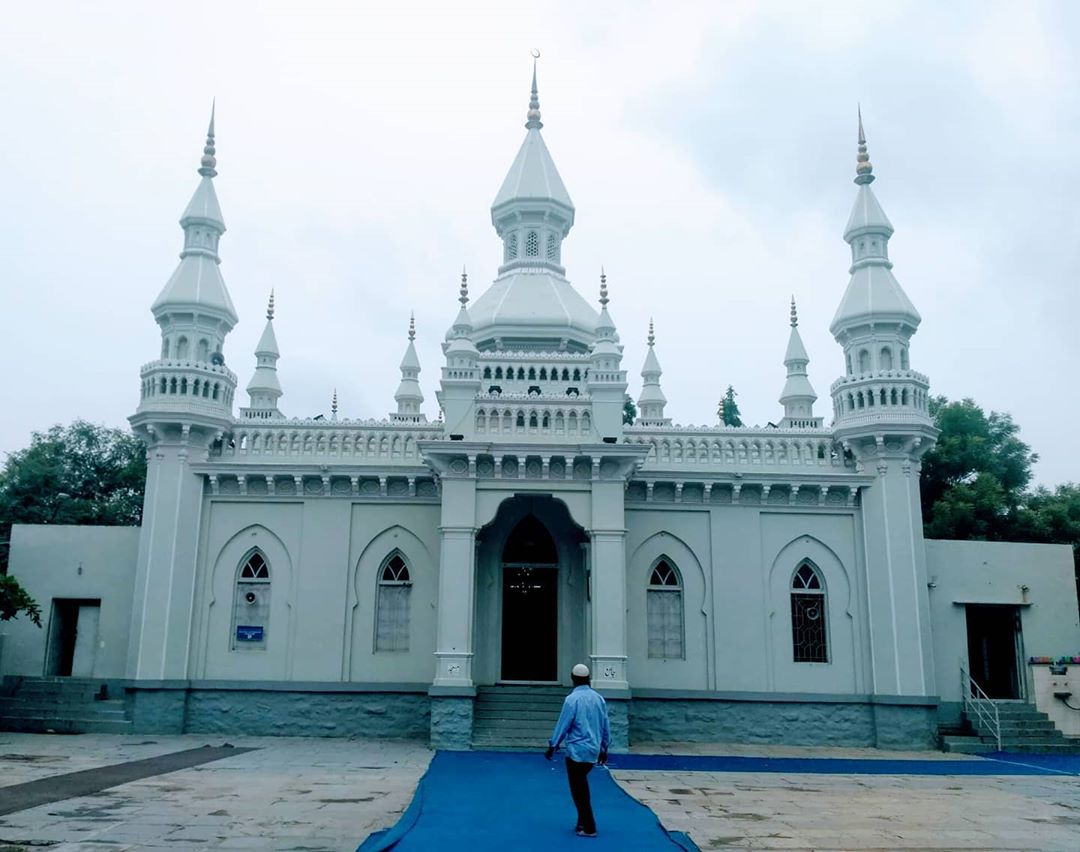 The Spanish Mosque is one of the most beautiful mosques in Hyderabad, located within the premises of Paigah Palace. The unique architecture and its glorious history make it one of the most alluring heritage monuments of the city that you must visit.

The design and architecture of the Spanish Mosque is inspired from the grand Cathedral–Mosque of Córdoba in Spain and the Jama Masjid of Gulbarga. The pointed arches, minimal geometric design and octagonal spires are some of the striking features of this mosque. The elements of Moorish, European and Islamic architecture beautifully blend in this spectacular mosque. 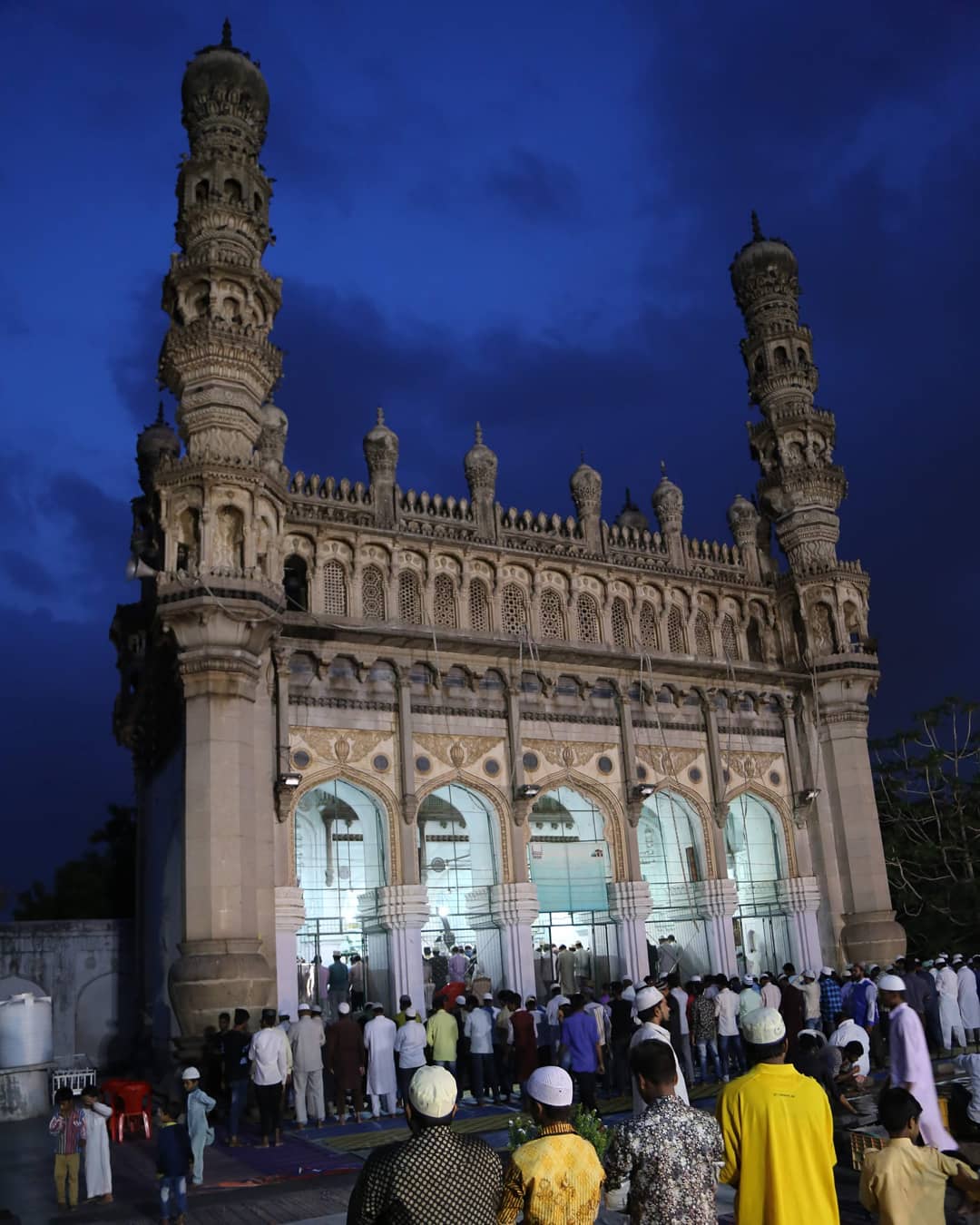 The Archaeological Survey of India recognised Toli Masjid as a heritage site and in 2005 it had also received an award from INTACH (Indian National Trust for Art and Cultural Heritage).

The intricate works on the five arches on the front side of the Toli Masjid is one of the most attractive architectural features of this religious site. The inscriptions on the prayer hall and designs on the four minarets reflect the artistic skills of the bygone era. 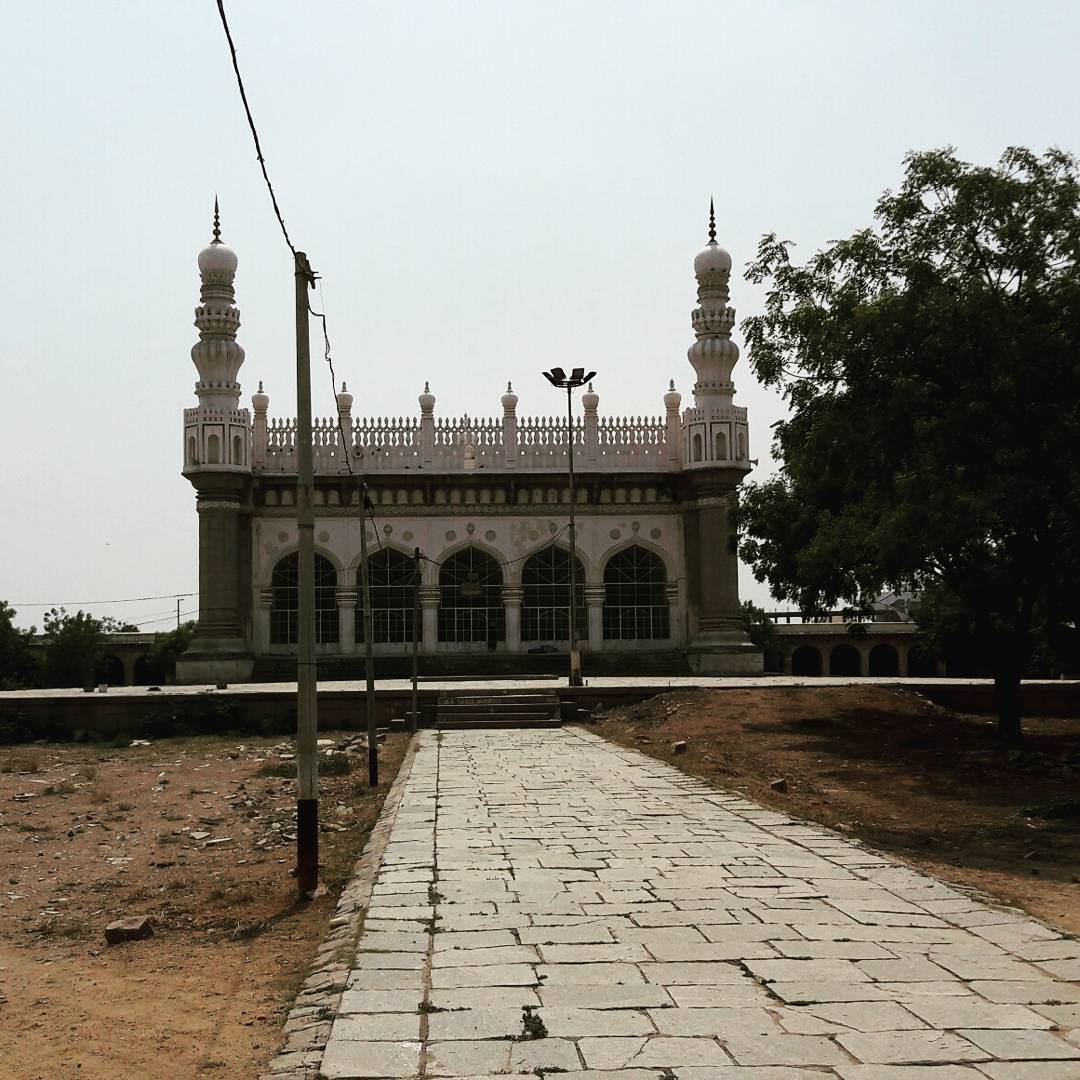 This almost 350-year-old mosque located at Hayathnagar is one of the most splendid mosques near Hyderabad that you must visit. Hayat Bakshi Mosque is known by many names such as Hayat Bakshi Begum Mosque and Hayathnagar Grand Mosque.

Hayat Bakshi Begum Mosque was built in 1672 during the reign of the seventh Sultan of Golconda, Abdullah Qutb Shah. Hayat Bakshi, Queen Mother, popularly known as Ma Saheba, was involved in commissioning the construction of this majestic mosque. This iconic mosque was constructed in typical Qutib Shahi architectural style.

The grand facade of the mosque boasts of five arches on the front side, two ornate minarets and arcaded galleries. The intricate work on the dome and minarets of the mosque will surely leave you awestruck. Hayat Bakshi Begum Mosque is surely a treat for all the architecture and photography enthusiasts. Thus, Hayat Bakshi Mosque is one of the most famous mosques near Hyderabad.

A guest house with 130 rooms, a Caravan Sarai (rest house), an ablution tank and Hathi Bawli (a well) is located within the expansive premise of the mosque. 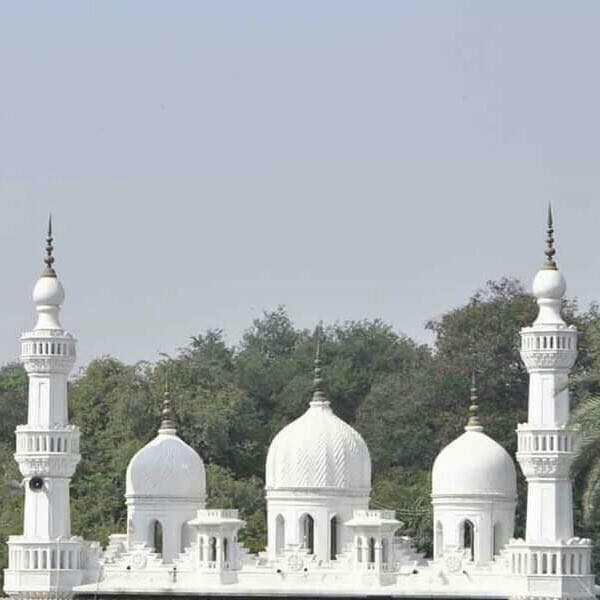 This whitewashed mosque is located at Bagh-e-Aam, popularly known as the Public Gardens. Bagh-e-Aam is said to be one of the oldest gardens located within the twin cities of Hyderabad and Secunderabad. Shahi Masjid is a century-old mosque built by Nizam Mir Osman Ali Khan, the seventh Nizam of the princely state of Hyderabad.

The term Shahi Masjid translates into Royal Mosque (‘Shahi’ means royal and ‘Masjid’ means mosque), as the members of the royal family and their relatives used to offer prayers on this mosque; especially on Fridays and on festive days and other special occasions like Eid. The two Niyaz Khanas or kitchens located on either side of this elegant mosque served food to the underprivileged and pilgrims.

Shahi Masjid is not as majestic as the other mosques built during the rule of the Nizams though. This mosque can accommodate about 100 worshippers at once. The arches, domes and minarets of this mosque inherit the characteristics of Qutub Shahi architecture. 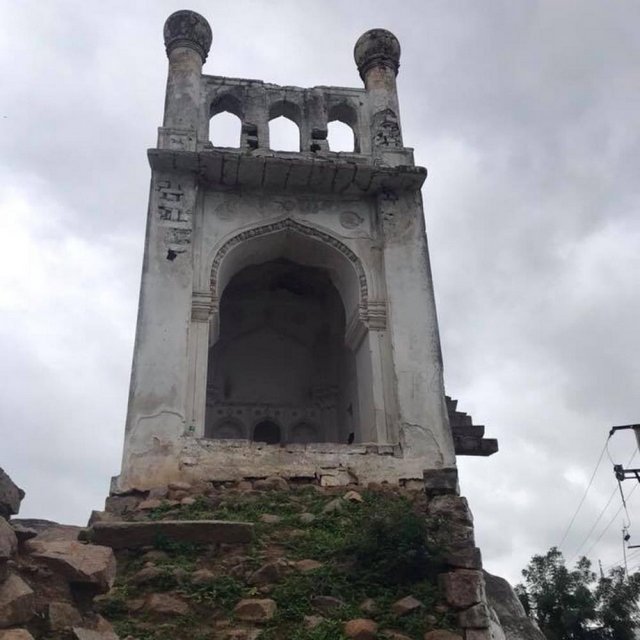 This 400-year-old mosque standing on a hill at Mir Mahmood Ki Pahad in Kishan Bagh is one of the most awe-inspiring mosques in Hyderabad. This mosque overlooks the Mir Alam Tank and stands very close to the Dargah Hazrat Syed Shah Imaad Uddin Mohammed Mahmood Al Husaini.

Masjid Mir Mahmood Shahm popularly known as Jinn Masjid, is said to be one of the smallest mosques in the country. The mosque stands on an area measuring less than 10 square metres in area. Masjid Mir Mahmood Shah has one arch, two minarets, a pulpit and a Mehrab (a niche on the wall of the mosque that indicates the direction of Mecca). This modest mosque stands in stark contrast to most of the grand mosques belonging to the Qutub Shahi dynasty. 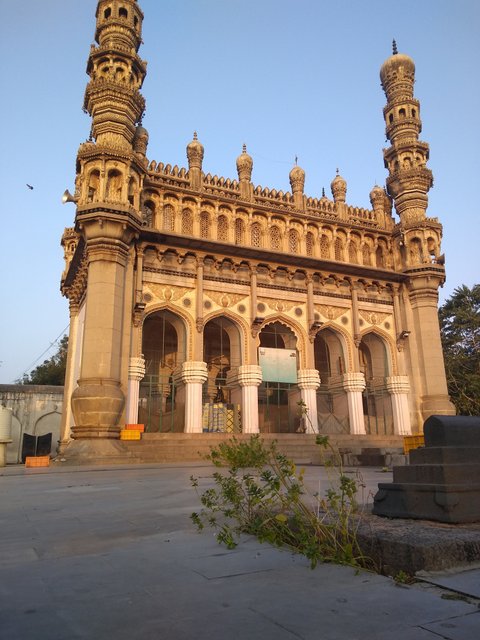 This elegant mosque was constructed using the traditional Qutb Shahi architecture elements like three arched openings, decorated minarets and beautifully carved inscriptions. An elevated sarcophagus, a Caravan Sarai, a well, and several other graves are located within the complex of Kulsum Begum Masjid. 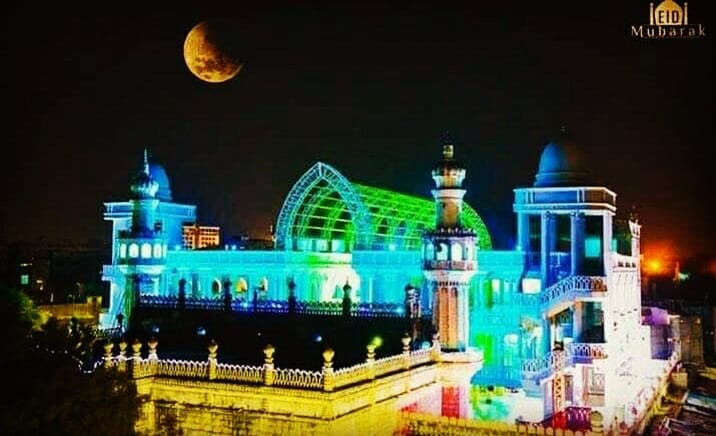 This 400-year-old mosque located at Musheerabad is one of the most majestic and oldest mosques in Hyderabad. Musheerabad Masjid is also known by names such as Musheerabad Badi Masjid and Jama Masjid Musheerabad.

The breathing mosque is adorned with two bulbous minarets and artistically decorated five arches. The original structure of the mosque was constructed by Ibrahim Quli Qutb Shah.

The old mosque now stands in ruins and a new grand mosque has been constructed on the large courtyard area of the old mosque. 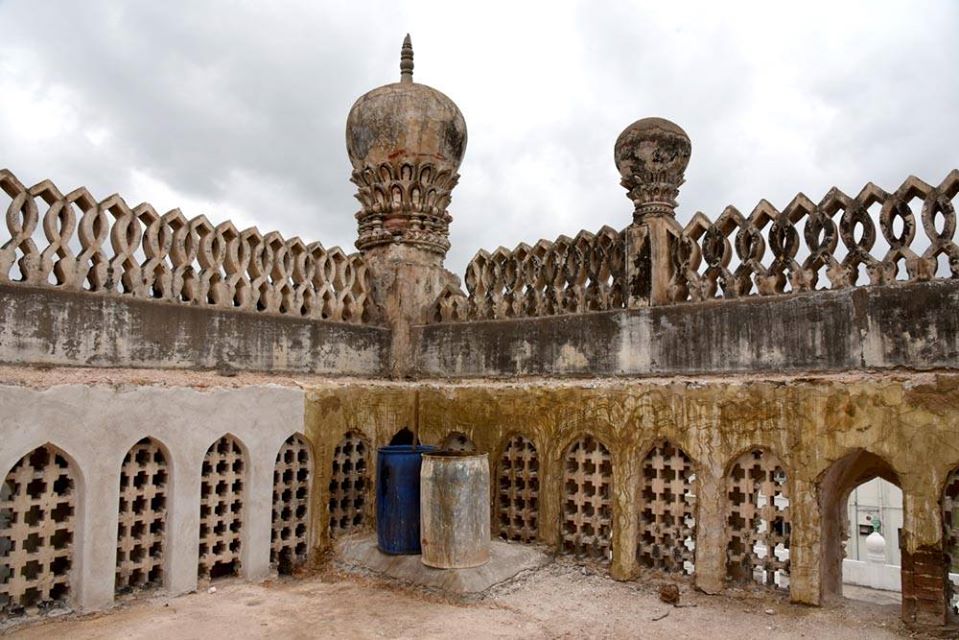 Khairtabad Mosque is a 394-year-old mosque that was built by Khairunisa Begum, daughter of Sultan Muhammad Qutb Shah, the sixth ruler of Golconda. The mosque was constructed by Khairunisa Begum in 1626 for Akhund Mulla Abul Malik, who was her tutor.

Hussain Shah Wali, the son-in-law of Khairunisa Begum, was the architect of this iconic mosque. Khairtabad Mosque has been declared as a heritage site by INTACH (Indian National Trust for Art and Cultural Heritage).

The intricate Jali work, decorative three-arches on the front side and minarets are some of the prominent features of the architecture of Khairtabad Mosque. 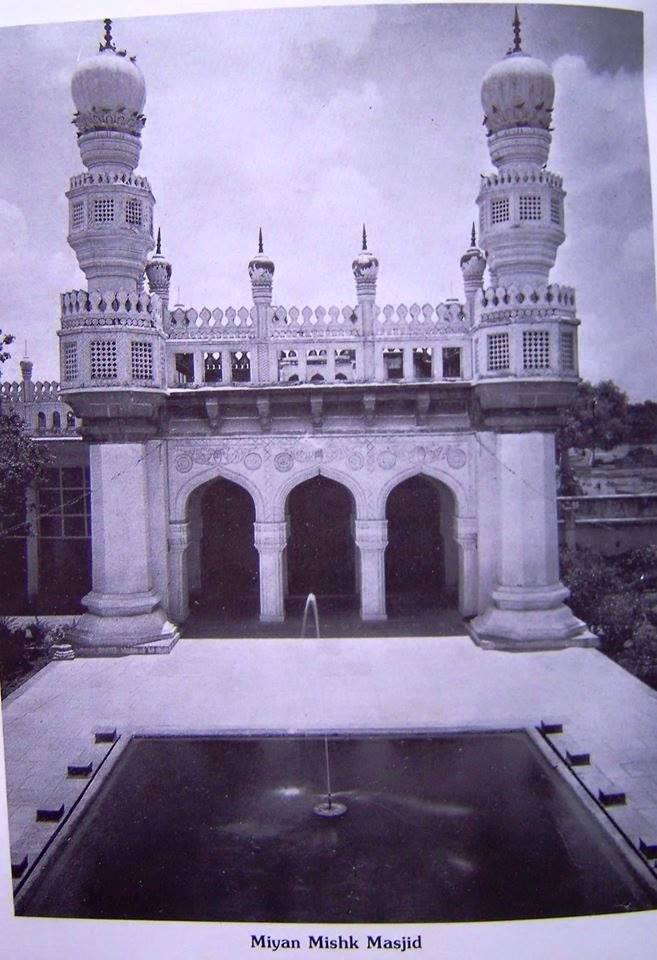 This over 300-year-old mosque was built by Mian Mishk Masjid, a noble of Abdullah Qutub Shah, the seventh ruler of Golconda. Although this mosque is not as grand as the other mosques built by the Qutub Shah dynasty, the mosque presents features that are typical to the architecture during the reign of Qutub Shah dynasty.

The simple design of the minarets and the arches present a modest look to this age-old mosque. The artistic inscription on the mosque demonstrates the style of the artistry of the period. There is a facility of garam Hamam, a facility of the hot water bath within the premises of Mian Mishk Masjid. 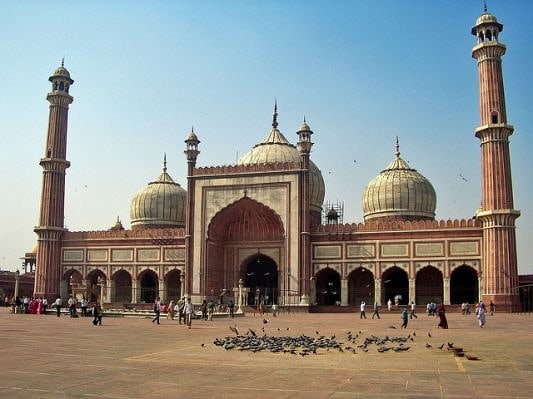 The Jama Masjid of Hyderabad is one of the oldest mosques in the city, which was constructed in 1597 by Quli Qutub Shah. The mosque was constructed after the capital of the Qutub Shahi dynasty was moved from Golconda to Hyderabad.

There are ruins of an ancient Turkish bath within the premises of Jama Masjid. A school and a monastery are said to have been there previously within the complex of the mosque as well. Since Jama Masjid is located in proximity of the elegant Charminar, it attracts a number of tourists. Till date, it continues to be one of the most popular mosques visited by a large number of tourists and worshippers. 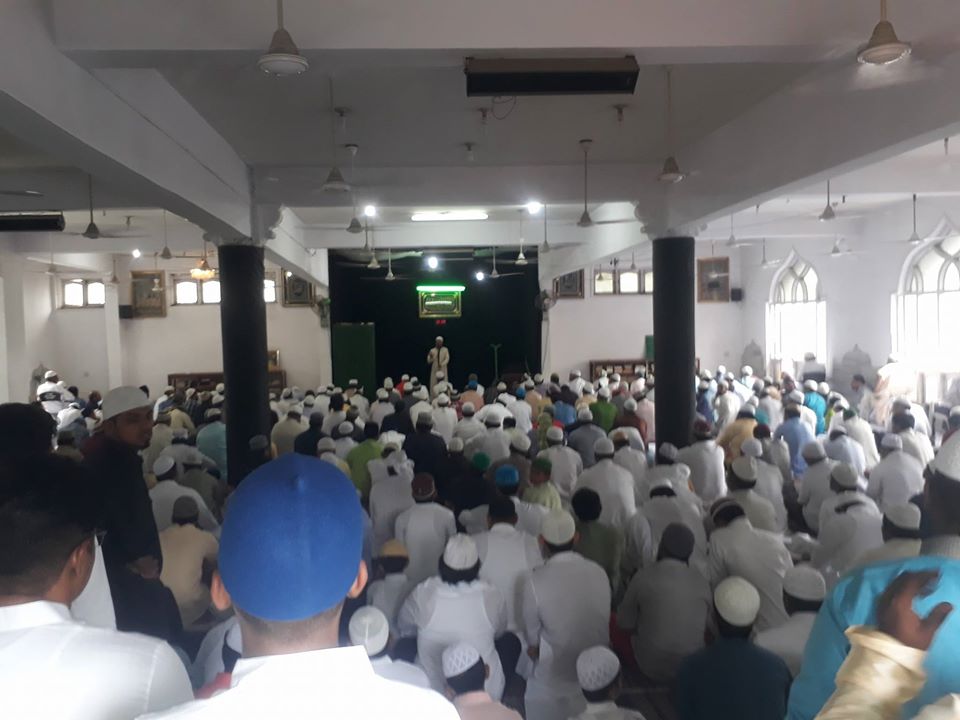 This mosque located at Ameerpet was constructed by the family of the Nawabs decades ago. This mosque is named after the wife of Nawab Farooq Ali Khan, Aktharunnissa Begum Saheba.

Masjid-E-Akhtarunissa Begum comes to life during the holy month of Ramadan. For the past fifteen years, the mosque has been serving free Iftar meals to people belonging to underprivileged backgrounds for breaking their fasts. Every day during Ramadan, about 125-150 kg of food is prepared for 1200 worshippers.

The mosques in Hyderabad present before its visitors a beautiful blend of both majestic as well as modest mosques. While most of the mosques in the city have retained their alluring structure, some of them have been the victim of time and are now standing in ruins.

If you visit the above-mentioned mosques, you will perhaps understand that these religious places in Hyderabad are much revered for their cultural and historical significance.

If you have visited any of the above-mentioned mosques or you know of any other beautiful old mosques in Hyderabad, let us know by commenting in the section below.