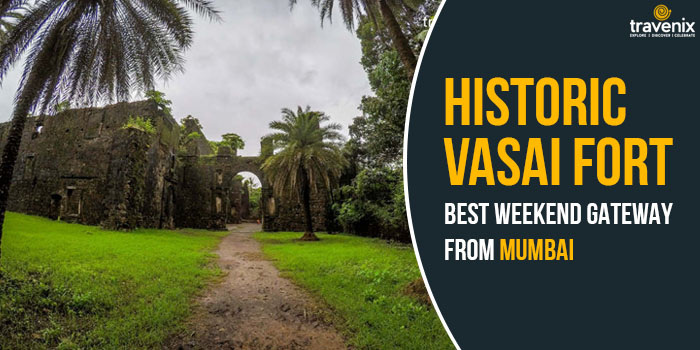 Vasai Fort – A Must Visit Heritage of Portuguese Influence in India

Vasai is a city of historical importance. Located in the Konkan Division of the Maharashtra State in the Palghar district, the city was one of the biggest assets of the Portuguese. Earlier a trading ground for Greeks, Arabs, Persians and Romans; Vasai, previously known as Bacaim, Bajipur, Bassein and finally Vasai, was a prominent part of mainland India.

Located 60 kilometres away from Mumbai, after becoming a Portuguese colony, the importance of the city increased manifold. Due to its proximity to the sea, allowing easy access to all sea routes, the Portuguese made Vasai, then called as Bacaim, it’s colony. The city houses the Vasai Fort, one of the most important forts in history. The fort offers a glimpse into the 16th and 17th centuries of the Portuguese Rule on Vasai. From the time of 16th century, Bassein was Portuguese northern capital with the treaty with the Sultan, until Marathas under the rule of Chimaji Appa captured the fort in the year 1739.

Vasai Fort, History and Places to Visit Nearby 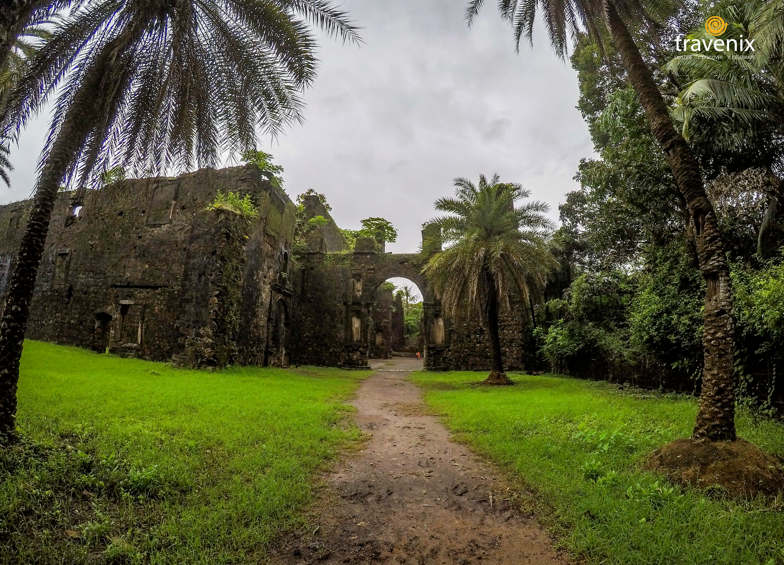 Stretching over 110 acres of land, the then called Fortaleza de São Sebastião de Baçaim (the Fort of Saint Sebastian of Vasai) was a city in itself. The interiors of the fort included the magnificent mansions of the Portuguese Noblemen, temples, churches, hospitals, colleges, and administrative centres.

Surrounded by the sea on three sides, the strategic position of the fort allowed the Portuguese to keep an eye out for anything unusual, making it impassable. The Portuguese used the fort as their commercial and military base. Today, the remains of the fort offer a peek into the yesteryears. Several watchtowers still stand, with staircases leading up. The Marathas tried to capture Vasai Fort, however they couldn’t gain access, making only minor dents on the fort which are still visible. The view atop definitely makes it worth it to climb these towers. However, the buildings inside the fort remain ruined, with the arches’ carved stoned weathered over the years. The bastions of the Fort offer the amazing view of Vasai Creek and the Bhayandar Creek.

The Churches in the Fort 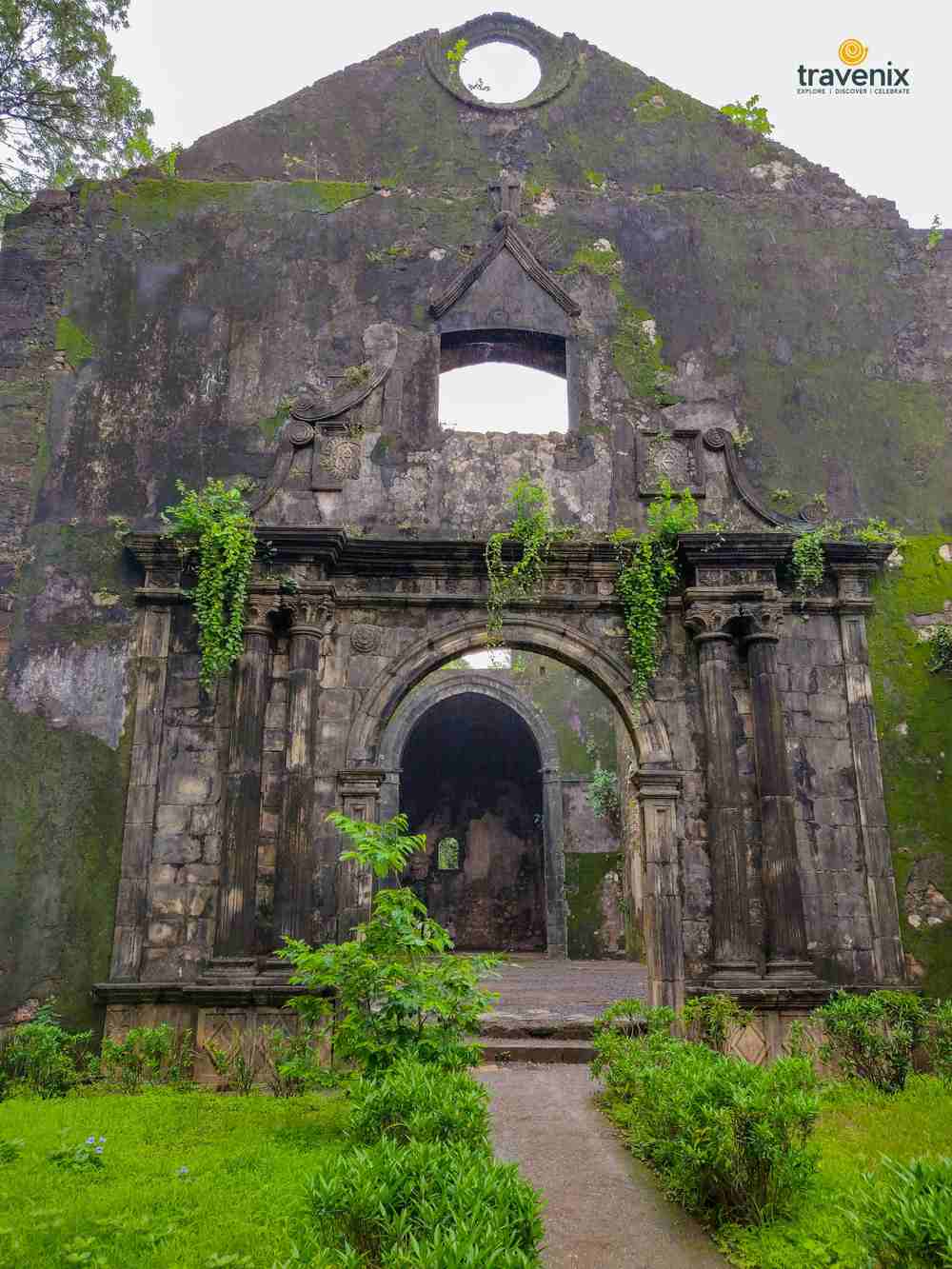 There are various chapels inside the fort that one can still recognise including the Holy Name of Jesus Church, Saint Joseph’s Church, and the Franciscan Church of Saint Anthony. They have the facades of the typical 17th century Portuguese Churches. The Church’s construction took place over many years from 1549.

Nowadays, the Franciscan Church of Saint Anthony is the only church in the fort that continues to be used for worship. The annual Feast of Saint Gonsalo Garcia (the first Indian to saint, who was born a Vasai village) is still held there. The church dates back to 1557. There are about 250 tombstones lined on its floor, with inscriptions saying that they belong to the Portuguese noblemen.

Saint Joseph’s Church was the tallest church in Vasai Fort. It was built in 1546, but renovated and enlarged in 1601. The steps to the Church can still be climbed, overlooking the magnificent view of the coast. 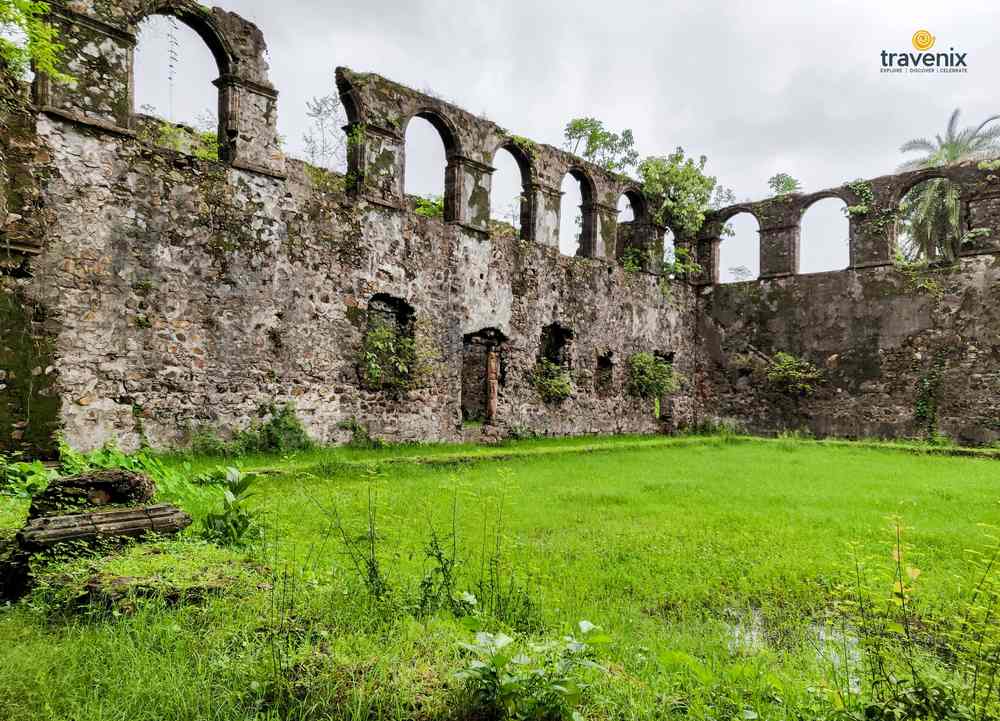 The ideal time to visit the fort would be between the months of October to January, i.e. during the winters. The weather would make Vasai Fort perfect; and for a one day getaway, the Monsoon would also be a good time because in the vicinity of the Fort, you will also find a variety of flowers, trees and insects. However, you need to be careful as the fort might be mildly flooded.

Place to visit nearby 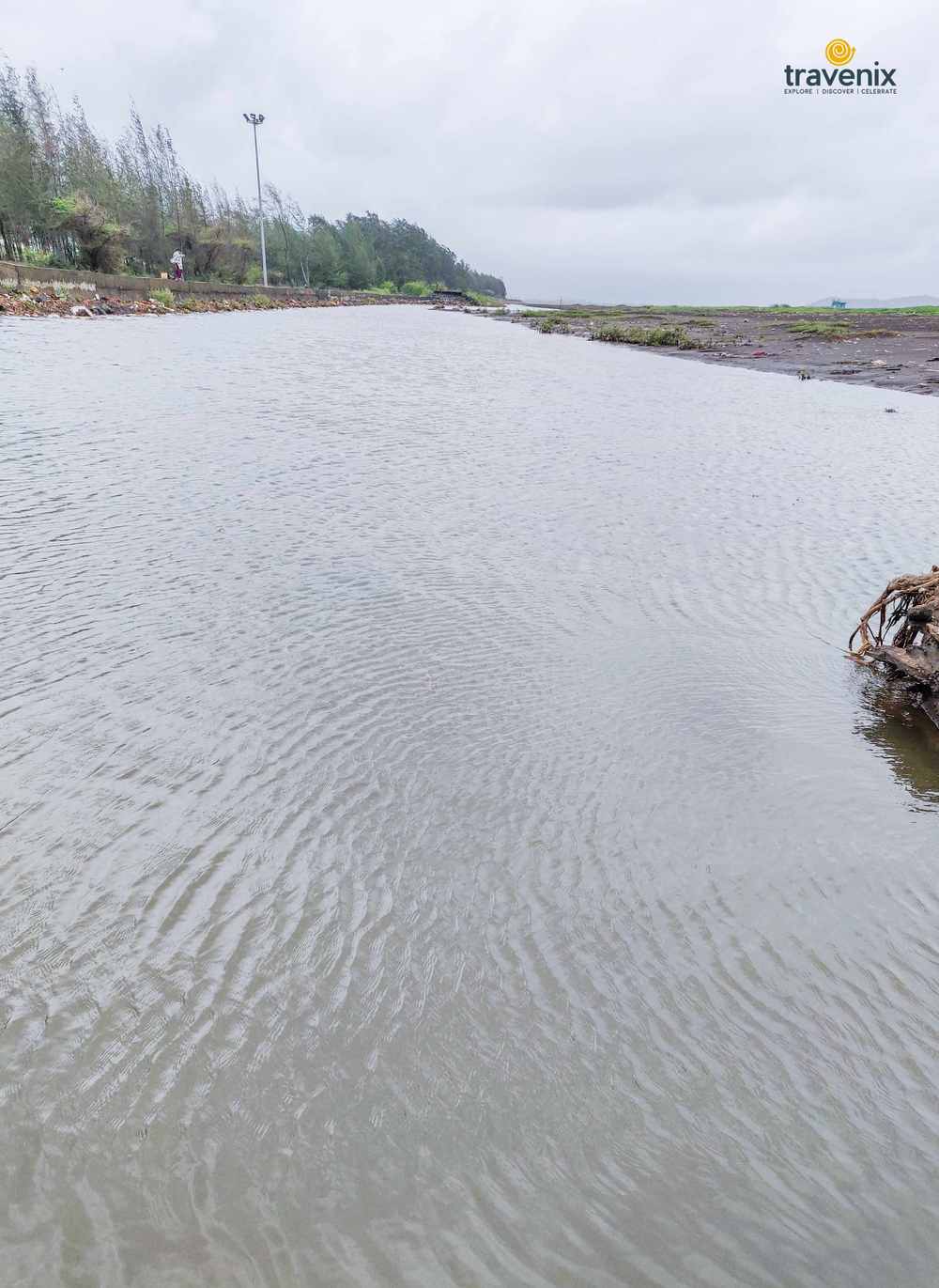 A place to visit nearby the Fort is the Suruchi Beach. This virgin beach in Vasai is a hidden gem. The beach is just 15 minutes away from the fort, and is a perfect place to unwind and relax after exploring the sprawling fort. A rather calm beach, you can just sit back relax. There are several gola walas around, a perfect accompaniment for a peaceful evening. There are several food stalls as well. The best time to visit the beach would be between 4 pm and 7 pm. The beach offers an amazing sunset, picture-perfect for evening walks. Though, during monsoon, because of high tide, one has to be careful. Although, it is not advisable to venture out in the beach alone, especially during late hours.

One of the key attractions of the beach is a pseudo lagoon, a shallow body of water separated from the actual sea. This unique feature at the beach distinguishes it from the rest and makes it a place you must visit! Due to its optimum depth, it also acts as a safe play area for kids.

From the fort you can either take the bus or the auto. The bus will drop you off at the road leading to the beach. You will have to then walk the rest of the way. Whereas the auto will drop you just outside the beach. However, buses are recommended, since autos will charge five times more.

How to get there? 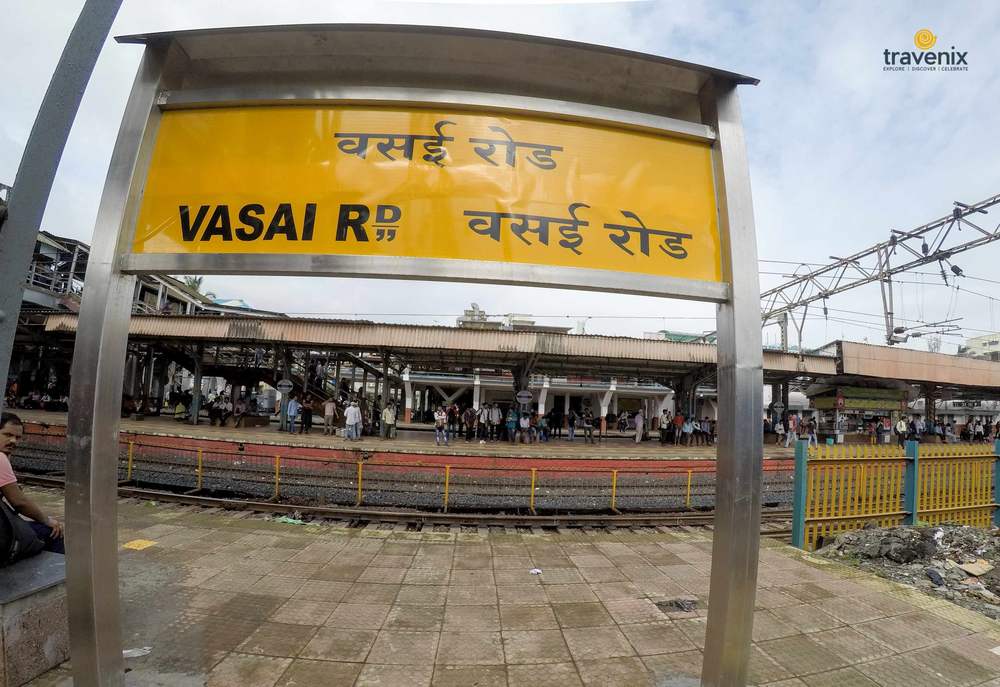 The fort and the town to are accessible via the Vasai Road Railway Station. The best way to get to Vasai Fort would be taking the Western Railway Mumbai Local Train to Virar or Dahanu and alight at Vasai Road Station. If you are departing from Central Railway, you will have to change trains at Dadar, and take a Virar bound train. From there, either take an auto or bus to Vasai Fort, which is approximately twenty minutes away from the station. There is a State Road Transport Bus Terminus & Station adjacent and to the immediate west of the Vasai Road Railway Station in Manickpur-Navghar. The bus heading to the Vasai Fort is “Killa Bunder” or “Fort Jetty/Quay”. There are buses every half an hour, and you can alight at the last stop and walk the rest of the way. The bus tickets cost approximately 15 rupees per head. Reaching Vasai Fort by road would approximately take 2 hours from Mumbai. 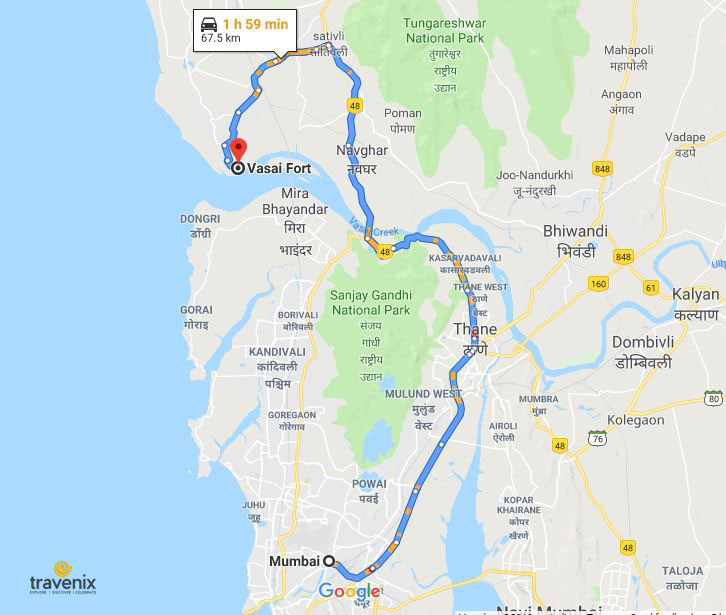 Vasai Fort continues to remains one of the main tourist attractions in Vasai. People love coming here and exploring what remains of the fort. The fort is an architectural marvel and is a perfect place to visit for a one day get-away. Currently, the fort remains as a national protected monument under the Archeological Survey of India.